The first shuffling within the ownership group happened prior to the 1954 season when original members J. Lawrence Peters, who was the Speedbowl’s 1st president, and William Hoffner sold their shares of Waterford Speedbowl, Inc to the remaining members. Fred Benvenuti became the new President and Anthony Albino was appointed the new vice-president.

Some of the improvements made this season included paving the south pits and sections of the parking lot and freshly painting the midway concessions area.  The weekly events remained the same in format for the most part.  The Non-Ford division struggled with car counts early in the season.  During the first 2 scheduled events, they ran during the Modified feature and the highest Non-Ford driver in the race was credited with a NF win.  They ran there first stand-only feature on May 5th and as the season played out they would eventually out-draw the Modifieds in car counts during some weeks late in the year.

“Moneybags” Moe Gherzi lived up to his nickname in 1954 scoring 14 feature wins in the Modified division, including five 50-lappers and the Labor Day 100 lap event – all big purse payouts.  He also won one of the twin-25’s and was declared overall winner of the Mad Cap 50 in September.  On July 3, he became the first driver to win 2 features in the same day at the Speedbowl when he won 50 lap Sportsmen event and the 100 lap Late Model special event.  In spite of all those wins, he was still locked in a battle atop the points with 5-time winner Fred Luchesi.  It went down to the final point race on October 10.  Joe McNulty would take his 2nd 50-lap victory of the season with the win in that event while Gherzi finished 3rd.  But it was Luchesi, the point leader going into the event, who finished behind Moe in 4th and clinched his first Speedbowl Track Championship.

On August 21, the Speedbowl suffered it’s only fatality when John K. “Jack” Griffin was died from injuries sustained during Saturday event.  Griffin was in the armed services and raced under the name P.D. Jackson. On this particular night, his car struck the rear of the car in front of him which sent him into approximately 10 flips down the straightaway.  Don Benvenuti, son of Speedbowl co-owner Fred Benvenuti, was one of the people who tried to get Griffin out from his racecar.  Many believed Griffin was killed instantly, however the 41 year old was taken to nearby Lawrence & Memorial Hospital and was pronounced dead just after 1am.  Griffin drove a ‘cut-down’ style of Modified, which was a very light-weighing style of car with few safety features.  Cut-downs were banned at the Speedbowl before the 1955 season began.

The very next week after the sadness of losing Griffin, on Wednesday August 25, 23-year old Larry Clark was behind the wheel for the first time in his career when he flipped over during the first Sportsmen heat.  His safety belt broke and he was thrown from the car into the infield, his car then came to a stop within a couple feet of him as he narrowly escaped being pinned under it.  He was transported to the hospital after suffering severe jaw and skull fractures.  Finally, during the season-ending show, Hank Stevens was badly burned when his car became engulfed in flames during a wreck. Thankfully Clark and Stevens were eventually released from the hospital and returned to the race track in upcoming seasons.

Tom Van Epps won 4 straight Non Ford features in June and was headed for a 5th straight when he broke while leading with 2 laps to go during the June 19th event, Arnie Harris picked up the win.  Van Epps won 4 in a row again the following month and by season’s end he had 12 victories total and the Non-Ford Championship.  Sadly, Van Epps would be killed the following March in a car accident along with fellow race car drivers Jerry DeGrossa, Tom Mitchell and Bill Thompson 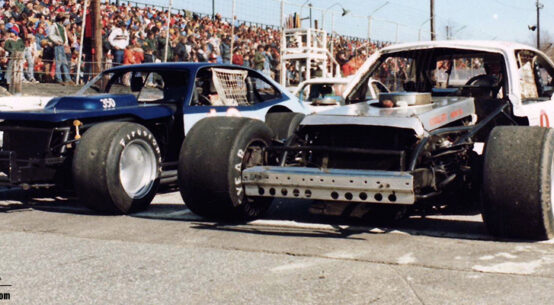 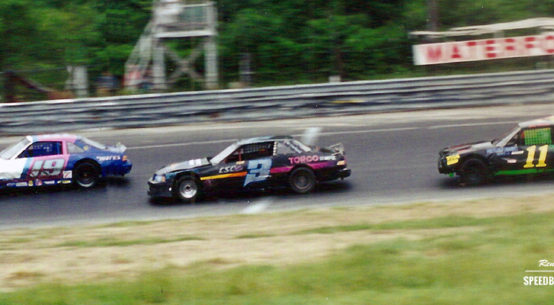