After more than 5 years as Speedbowl Race Director, Bill Roberts resigned when he relocated out of New England for his day job.  Roberts’ tenure as Race Director was 2nd longest in Speedbowl history behind John Whitehouse.  His replacement was former Street Stock competitor and flagman Steve Harraka.  General Manager Bill Roth was also promoted to Chief Operating Officer of T.H.E. Enterprises, the operational group headed by Terry Eames.  Roth’s new role was the start of a gradual progression over the next few years where Terry Eames would become more removed from the day-to-day operations.

For the first time, none of the the 5 defending Saturday division champions returned to defend their title.  SK Champion Ed Reed Jr took the year off; Late Model Champion Corey Hutchings made only a few appearances but did win this season’s Pepsi 300 LM event; Defending Sportsman champ Keith Rocco would run at Stafford Motor Speedway in an SK Modified; Mini Stock Champ Glenn Colvin turned his attentions to his #7 SK Modified and Saturday Legend Car champ Michael Pepe also remained absent from the Speedbowl in 2005.

Ron Yuhas Jr his #6 green machine, led the point race for all but one week heading into the Finale race.  He also had a division leading 4 wins at that point and 3 previous career Finale wins.  But in this year’s 100 lapper, Yuhas was involved in an accident and finished the race deep in the field. Rob Summers, running his first full SK season at the Speedbowl after years on the NASCAR Modified Tour, entered the race just 2 pts behind Yuhas and finished in the top 5.  By virtue of a rule implemented this season allowing competitors to drop their worst 2 finishes during the season, Summers won the points championship over Yuhas after the final points were tallied.  The “drop two rule” was later abandoned after only one year.  Tom Fox won the $5,000 Modified Nationals, Yuhas won the Pepsi 300 SK 100 and Chris Pasteryak won the Finale SK 100.

Mark St. Hilaire won the 2005 Late Model points championship without winning a feature event.  During the Finale 100 lapper, Mark’s championship hopes were put in severe jeopardy when he blew his motor during the feature.  Fortunately for him, his closest points challenger, 4-time track champion Allen Coates, was not able to make up the difference before the checkereds flew giving St. Hiliare his first ever track championship.  Ironically, it was the first season Mark hadn’t won a feature since 1998.  Bruce Thomas Jr won the season opening 50-lapper with Corey Hutchings and Charles Bailey III winning the 100 lappers.

Dennis Botticello became the first competitor to run a dominant ACT race car among the traditional G-metric late models.  ACT cars, named after the American-Canadian Late Model Tour that their rules are based on, had been track legal since the 2003 season with a few competitors having moderate success, most notably Larry Goss.  Dennis appeared mid-season and promptly broke the Late Model lap record qualifying for the Pepsi 300 with a 15.446 time trial effort.  Later in the season, in a span of just 15 days, he won 3 of 4 late model events, eventually finishing 2nd in division wins for the season.  His red #03 was owned by Scott Fearn.

Tony Hirschman Jr set fast time during qualifying for both NASCAR Whelen Modified Tour events.  Although neither time broke Chuck Hossfeld’s track record set the year before, it was the fourth time Tony won the NASCAR Bud Pole Award at the Speedbowl.

Despite terrible luck at his home track during his first few years on NASCAR Busch East tour, popular local driver Matt Kobyluck built upon his 2004 3rd place finish by winning the Town Fair Tire 150 event in late July.  Kobyluck earned 13 victories from 1993-1997 in the Speedbowl Late Models before advancing to the NASCAR regional ranks.

Norm Root Jr made up for the disastrous end to his ’04 championship run by capturing the 2005 Sportsman title in his pumpkin orange colored #80.  He also won a division best 4 feature events, including a 50 lapper in July.  Former Mini Stock Champion Dan Darnstaedt, who had run full seasons in both the 4 and 8-cylinder stock divisions over his career, finally scored his first Sportsman win on June 4th.  He finished the season tied with Root for the division wins lead after taking 3 of 4 feature events late in the season.  Dan has over 30 overall feature wins at the Waterford Speedbowl. Joe Curioso III set fast time for the division during the Pepsi 300 and also won the Finale SM 50 event to close the season.

The Mini Stocks saw the emergence of 2 second generation drivers as Ken Cassidy Jr and Joe Godbout III both won 4 feature events which. Phil Evans also had 4 wins to co-lead the division.  Cassidy won an early season 30 lapper & the Finale 50. He also broke Jeff Miller’s lap time record with a time trial qualifying lap of 17.575 seconds during the Pepsi 300.  Amazingly, his time was faster then Joe Curioso III‘s new Sportsman track record of 17.645 set the same day.  One time Late Model Rookie of the Year Danny Field, who moved to the Mini Stocks years earlier, won his first track championship by 12 points over Richard Brooks. Field won the MS portion of the Pepsi 300, which was shortened to 38 laps due to weather.

Women On Wheels returned as a regular point division for the first time in over a decade when they were added as two semi-regular Wednesday night divisions.  Female competitors in both 4 and 8 cylinder enduro type cars produced 7 different winners with Sherry Williams (WOW Super X) and Lisa Vogelsong (WOW X-car) grabbing the point championships.

The D’Addario family dominated the late season races in the X-car division – collectively winning 6 of the last 7 features.  Curt D’Addario Sr and Curt D’Addario Jr (3 each) tied for the most wins in the division with Brad Vogelsong. 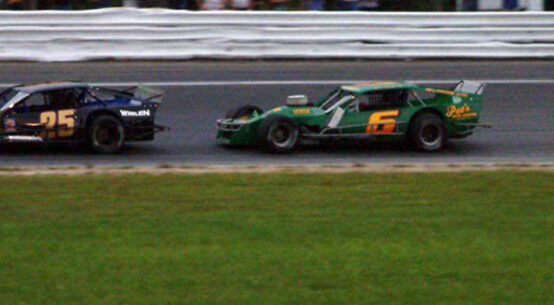