The Speedbowl’s future remained in jeopardy as the 2007 got under way with a court-ordered foreclosure auction for the Speedbowl property scheduled to take place Saturday July 28th.  Track owner Terry Eames, away from the day-to-day operations, worked tirelessly with prospective investors in hopes of getting his financial matters resolved before the auction.  Finally, it was longtime racing supporter Rocky Arbitell and businessman Peter Borelli who bought the note from the bank in the 11th hour, and the property auction was indeed cancelled.  Eames did however, sell off some acreage of the property to Harvey Industries, a window manufacturing company, to settle some of his debt issues.  The land sold had been used for RV’s and excess parking.  With all this going on off the track, the racing season remained uninterrupted and track operators Jerry Robinson & Bill Roth continued to run the track as The New Waterford Speedbowl, LLC.  However, for the first time since 1999, there were no NASCAR Regional Touring events held at the Speedbowl.  Prior to the season, Speedbowl GM Bill Roth stated that the high purse & overhead to host those events was too much for the Speedbowl at this time. The foreclosure issues were highly publicized in the local media, and car counts & fan attendance both suffered.

3-time winner Rob Janovic Jr won the SK Modified Track Championship.  He held off a serious challenge by Dennis Gada, who won the last 3 features in search of a record 7th SK Modified title.  Kenny Horton set a new fast time with a 14.061 lap during Pepsi 300 qualifying.  Jeff Pearl won 5 times, including the $5,000 SK 150 during the Modified Nationals opener and the 100 lap portion of the Pepsi 300.  Tom Fox won the North/South Shootout SK qualifier.  Dennis Gada was the Overall Double Down Shootout winner, with one twin feature won by 1997 SK Champ Todd Ceravolo.  Shawn Monahan led the points for most of the season, before disagreements with the track over an incident with the #91 SK team of Jeffery Paul led to his suspension for the last 4 events.  The SK Modifieds led all divisions (Saturday & Wednesday) with 10 different feature winners during the season.

Bruce Thomas Jr dominated the Late Models with 12 feature wins to earn his first LM Championship and second Speedbowl title overall (’01 Mini).  Bruce had streaks of 3 & 4 wins in a row and won the season opening 30 lapper & the Finale 100.  2006 champ Timmy Jordan ran a limited schedule and won 5 times.  After 2 years off, 1997 LM Champ Ed Reed Jr returned to the Late Model ranks as a teammate to Larry Goss.  Reed won 3 times and was declared the Overall Double Down Shootout winner.  Dennis Botticello won the 100 lapper during the Pepsi 300.  The division was dominated by ACT cars – all feature winners drove an American-Canadian Tour Late Model chassis.  The transition saw the car counts shrink to around 10 during the middle of the season. ACT cars consistently out handled the G-cars in the turns, even though G-cars typically had more powerful engines than the crate-motor required to run in the ACT cars. Ultimately the G-car teams became less competitive and by the end of the season, most did not return to compete on a weekly basis.

In the supporting divisions, Dwayne Dorr became only the second driver to successfully defend his Sportsman title (Glenn Boss 1992-93) when his division leading 6 wins propelled him to the championship.  Dwayne’s 20 career wins by season’s end put him second behind Ed Gertsch Jr (26) on the all-time Sportsman Wins List.  Bill Gertsch Jr won the first 2 legs of the Sportsman Triple Crown, but left weekly competition in the late summer to concentrate on his X-Modified car.  Al Stone III remained Dorr’s only threat to the title – Stone won 3 times (including the Finale SM 50) and finished second in points.  Jack Aquilina returned to weekly Sportsman competition and won a career-best 5 feature events – including one on his 17th wedding anniversary.

The Pepsi 300 was marred with controversy when car owner Scott Fearn put veteran Tom O’Sullivan behind the wheel of his #6 Camaro during the Sportsman event.  O’Sullivan shattered the track record in qualifying, then went on to win unchallenged during the 50 lap feature.  Although Camaros are listed as an illegal chassis for the division, Race Director Steve Harraka previously allowed Fearn to compete due to dwindling car counts.  Fearn’s performances in the weeks prior were uncompetitive.  O’Sullivan’s success during the mid-season Triple Crown event was not embraced by the remaining Sportsman competitors.  In the days after the event, Harraka eventually DQ’ed O’Sullivan for illegal left-side weight.  Al Stone III was credited with the Sportsman track record (he was the only other competitor to beat Dwayne Dorr’s previous record set the year before) and Billy Gertsch Jr (who finished 2nd on the track) was awarded victory in the 50 lap feature.  This controversy, along with Shawn Monahan’s aforementioned suspension, were 2 of several disagreements between the officials and the competitors over the course of the season.  As weeks went by, race teams in all divisions began to take weeks off – some not returning at all – resulting in sub-par car counts across the board for all the Saturday divisions. 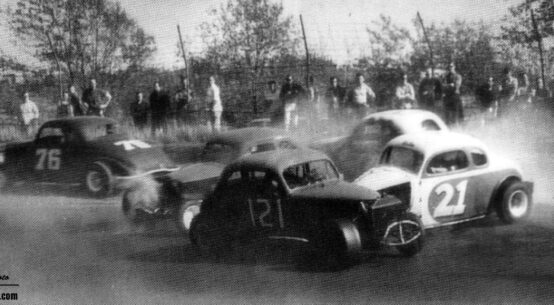 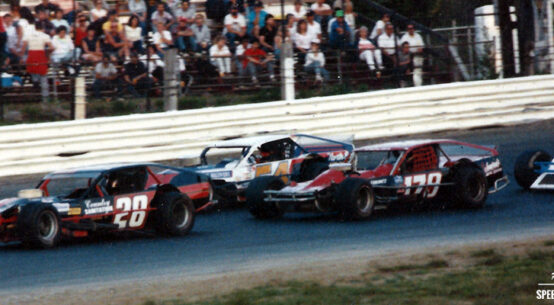