With the Non-Ford division dissolved early in 1961, the Speedbowl announced they would allow Sportsman cars to compete in the Modified division. In simple terms, the Sportsman cars were flathead V8 or 6-cylinder cars (like many of the Non-Fords), while the Modifieds were V8 cars with overhead valves. For the 1962 season, the Speedbowl decided to keep separate points for the Sportsman cars, although they would continue to compete in the Modified division. (The system was previously adopted for the 1958 season). Both a Modified and a Sportsman Champion would be crowned at season’s end.

In what turned out to be his last season behind the wheel, Dick Beauregard drove the Maffei #53 coupe to his second Speedbowl Modified championship. He won 14 features to lead the division, including three 50 lap and one 75 lap victories. He also had a streak of 5 wins in a row during July. Beauregard retired from racing soon after and moved to California where he lived for the rest of his life.

Hank Stevens, now behind the Simon Bros #9 car, won 4 races and earned the Sportsman Championship. He also finished runner-up to Beauregard in the Modifieds. Ted Stack had 50 lap & 75 lap victories among his 3 wins and finished 3rd in points.

Ed Moody once again was the big winner in the Bomber division, winning a division best 11 races and finally taking home the championship hardware at the end of the season. Moody won an incredible 43 Bomber events from 1960-62 – a record for victories in a 3 year span in a single division that still stands today. Among his 11 wins were two of the three extra-distance 25 lap events. Ed Gladue won 7 times, including the other 25 lap event. On September 30, a special 35 lap event called the Connecticut State Bomber Championship event was won by Bobby Santos – it was Santos’ first time ever competing at the Speedbowl.

After declining attendance over the last few years, Wednesday night racing was dissolved permanently. Although the Speedbowl has offered weekly point series on different nights of the week other than Saturdays in recent times (Sunday, Thursday, Wednesday), there would no longer be any point divisions racing on multiple nights on a regular weekly basis.

The NEMA Midgets returned once again as the only touring series to visit the Speedbowl during the 1962 season.  Dick Brown, who swept both NEMA events the previous year, won the first event in July for an unprecedented 3 straight NEMA wins at the ‘bowl.  John Dudevoir and Joe Csiki won the other two NEMA midget events held during the year. 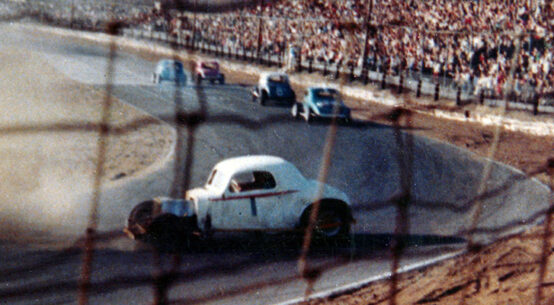