The K Corporation once again had off-the-track issues with the Northern Waterford Residents’ Association who challenged the Speedbowl’s decibal levels of sound throughout the area on race day. Ultimately, the Town of Waterford implemented a noise ordinance that was in conjunction with the State of Connecticut’s noise ordinance.  The State’s ordinance exempted auto racing, therefore the Speedbowl was allowed to continue operating without penalty.  Track officials became more diligent in enforcing the muffler rule established in 1991. There was now a $500 fined for any competitor who was not in compliance with the muffler rule.

Longtime Modified competitor Jerry Pearl, who already won 2 SK Modified track championships at Stafford Motor Speedway in 1984-85 and who finished 2nd in the standings at the Speedbowl in 1982, 1983, 1985 and 1991 finally captured his first championship at the Speedbowl.  He won 2 features during the season. Ricky Young won the longest event of the year – the 150 lap portion of the Waterford 200 – The Showdown in October.  Bob Potter won 3 times. Ted Christopher also won 3 times, including the 93 lap Blast Off event.  He led the SK Modified division in wins for the 4th consecutive year.   Jimmy Broderick won the SK 40 lapper during Chill Out ’93 and Richie Gallup won the 50 lap Busch Open to end the season.

After finishing runner-up for the championship the previous 3 seasons, Tom Fox would collect 9 Late Model wins to finally earn his first Speedbowl Championship.  He won the first 3 features of the year – which was last done by Phil Rondeau in 1989.  Fox would go on to represent the Waterford Speedbowl in Victory Lane at the Street Stock Race of Champions in Flemington, NJ – adding to one of his best overall seasons.  Fox became the 2nd Speedbowl competitor (Phil Rondeau) to win the ROC event in the previous 5 years.

Glenn Boss drove Dave Irish’s #11x car to his second consecutive Limited Sportsman track championship and became the first driver in division history to successfully defend his track title.  Ken Cassidy led the Sportsman division in wins with 4.  He also won 3 of the first 4 extra-distance races, taking the 30 lap portion of Blast Off and 20 lappers for the May Championship & the Mid-season Championship.  Limited Sportsman regular Saturday night features were 15 laps at the time.

Johnny “The King” Cambino, who was a big United star at the old West Haven (CT) Speedway in the 1960’s and later Riverside Park (MA) Speedway, came out of retirement at the age of 62 to compete in the Speedbowl’s Limited Sportsman division.  After first hanging up his helmet in 1978, a quick stint in a Legends of the Speedbowl exhibition race the previous year, revived his passion for being behind the wheel.  He drove Ignazio Puleo’s #7 car to 3 wins.

The NEMA midgets held one event on June 26th which was won by Jeff Horn.  The American 3/4 midgets made two visits – with Timmy Adams and Don Adams taking down the feature wins.

During the September 12th Sunday Stocker show and with only 2 point races left in the season, Mini Stock point leader Bob Greene was involved in a near-riot with several competitors after the Mini Stock feature.  Among the many post-altercation penalties issued by the track was a suspension for the remainder of the season for Greene.  The penalty opened the door for Billy Guyette to take the point championship even though he had yet to score a career win in the division.

Segment on the return of Johnny Cambino in the early 1990’s from Vault Productions’ documentary series on Speedbowl history. 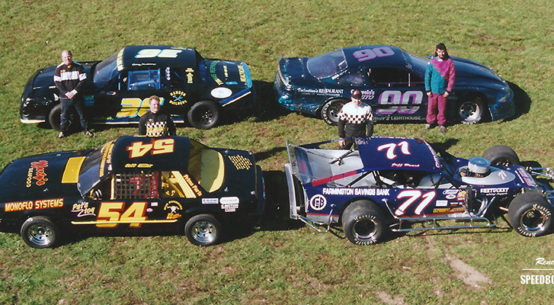 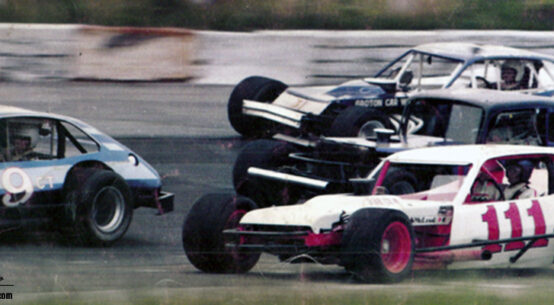